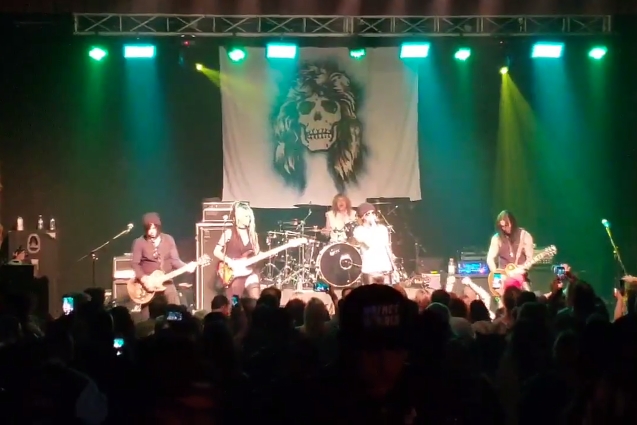 Adler's current solo band includes Ariel Kamin, the singer of Argentinian GN'R tribute band SON OF A GUN. Kamin replaced Constantine Maroulis of "American Idol" and "Rock Of Ages" fame, who was the vocalist for ADLER'S APPETITE for a dozen or so dates this past May, including an Australian tour.

Steven previously played with Ariel when the drummer joined SON OF GUN on stage in November 2016 in Buenos Aires, Argentina to perform several GN'R classics, including "You Could Be Mine" and "Welcome To The Jungle".

Back in April, when Constantine was first announced as the new frontman of ADLER'S APPETITE, Steven said: "GUNS N' ROSES are the biggest rock band in the fuckin' world now, and since the guys don't want me to play with them and I love these songs and I'm so proud of them ... now I finally have a singer who can compete with the young Axl Rose."

'Sweet Child Of Mine' from last night. Ari totally nails the vocals. He's better than Axl when Axl was good. What a great find for this band !!

Thank you Diesel Concerts Detroit for a great show!!! You guys ROCK!!!#tourlife #naturalhigh