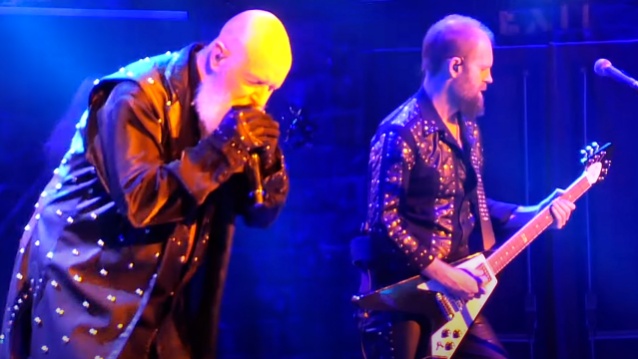 15. The Hellion/Electric Eye
16. Hell Bent For Leather
17. Breaking The Law
18. Living After Midnight

This past Monday (January 10), JUDAS PRIEST announced that it will perform as a four-piece on its upcoming tour. A few hours later, the band's former touring guitarist Andy Sneap, who co-produced the British heavy metal legends' 2018 album "Firepower", released a statement to BLABBERMOUTH.NET in which he said that he wasn't involved in PRIEST's decision to carry on as a quartet and thanked the Rob Halford-fronted outfit for the "mind-blowing" opportunity to share the stage with one of his favorite bands.

Sneap said: "Rob called me last Monday and said they wanted to move on as a four-piece, which I find incredibly disappointing after this amount of time but I respect his decision as they obviously have a vision how they want this to play out.

"This always was a temporary situation, and like I've said before, I'll always help the band any way I can, and that applies going forward also," he continued.

"I've been a huge fan of the band since the early '80s and it was mind-blowing to play onstage with the guys and quite frankly terrifying in the beginning at such short notice.

"We are moving forward with the new album next month and look forward to making a killer follow-up to 'Firepower'," he added.

Sneap, who is also known for his work in NWOBHM revivalists HELL and cult thrash outfit SABBAT, began touring with PRIEST four years ago after longtime guitarist Glenn Tipton — who was diagnosed with Parkinson's disease eight years ago after being stricken by the condition at least half a decade earlier — announced in early 2018 he was going to sit out touring activities in support of "Firepower".

Bassist Ian Hill is the sole remaining original member of PRIEST, which formed in 1969. Halford joined the group in 1973 and Tipton signed on in 1974. Rob left PRIEST in the early 1990s to form his own band, then came back to PRIEST in 2003. Founding guitarist K.K. Downing parted ways with the band in 2011, and was replaced by Richie Faulkner.

Two and a half years ago, Sneap said that he would continue to play guitar for JUDAS PRIEST "as long as they want me to." During an appearance on the "Talking Bollocks" podcast, Sneap stated: "It'd be great if Glenn was up there doing it. That's the thing that really… it's always in the back of my mind; it really is. But it's just nice that he asked me to do it. As long as they want me to help out, I'll help 'em out. That's kind of the way I'm looking at it, really."

Last June, Halford told Metal Pilgrim that Sneap would likely continue being the second guitarist for PRIEST in a live situation. "Andy is still standing in that spot for Glenn with Glenn's blessing," he said. "It's pretty much a given [that Andy will be going out on tour with us again]. And my gratitude to Andy. It couldn't have happened in a better way, if you wanna try and make something good out of it. It was a really important day when Glenn said, 'I think it's probably best if I step to the side and maybe we should let Andy come in.' That was just a really beautiful act of selflessness. That's Glenn treasuring PRIEST and PRIEST's reputation, particularly in live concert more than anything else. So bless Glenn for that. And as a result, Andy stepped in and did amazing work on the 'Firepower' tour, and we're looking forward to doing the same thing with him on this 50th-anniversary [tour]. And don't discount the fact that Glenn can show up. He plays the guitar differently, but there's no reason why Glenn can't show up and do some work. I mean, I've said to Glenn, 'Just walk out on stage and do that to everybody [flashes devil horns], and the people will just go fucking crazy, 'cause you are loved so much.' But I've got a feeling that Glenn's gonna be making the occasional appearance on this 50th-anniversary [tour]."

In 2019, Hill said that it was up to Sneap to decide if he wanted to carry on playing guitar for JUDAS PRIEST after the completion of the "Firepower" tour. "It is something to be discussed, really," he told "Talking Metal". "I mean, Andy is now, these days, first and foremost a producer. Whether he wants to go back and do that full time or not, it'll be a mutual decision when the time comes. Andy will be more than welcome to stay. He's done a tremendous job over the last year or so, really. He's done a great job stepping in for Glenn. It would have been very difficult if he hadn't been there, on such short notice, because we didn't realize that Glenn couldn't handle the intensity of touring anymore until… We were only about three weeks away from starting the tour [laughs], and Andy stepped in and did a great job. He pulled a real rabbit out of the hat in learning a complete setlist of songs in such a short period of time. He pulled it off anyway. And as time's gone on, obviously, his stage presence, he got more comfortable with that, and he's performing great now. So when the time comes… We'll give it to the end of this run and then see what everybody wants to do. As I say, he'll be more than welcome to carry on with us if that's his plan."