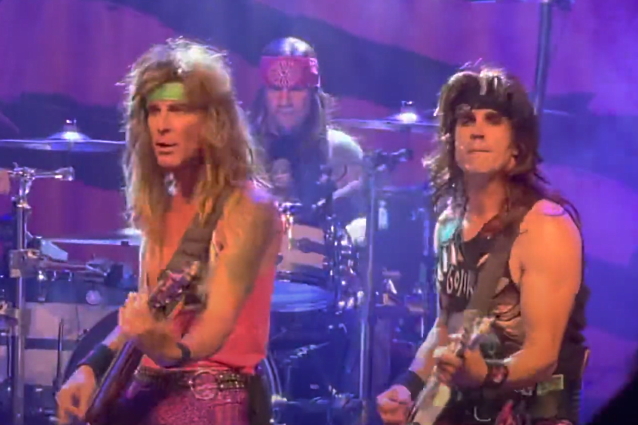 Fan-filmed video footage of some of STEEL PANTHER's recent live performances, featuring Dazzle on bass, can be seen below.

Earlier this month, Lexxi — whose real name is Travis Haley — told Rocking With Jam Man that he hadn't spoken with his former bandmates since his exit. "I still talk to the singer [Michael Starr] a little bit; I have in the past," he said. "But I think that those scars and I think that the departure, the way that it went down, I think there's some sore spots. But that's tough for me to talk about.

"That was something that I'm very proud of — to be that character for such a long period of time, and to play with those cats," he continued. "They're all amazing musicians. And I just think that it is different to not have that [in my life] — I'd been in character for so long — but I have to say it's a little refreshing as well."

When STEEL PANTHER first announced Lexxi's exit in July, the band jokingly said that Foxx "started his side business, 'Sexy Lexxi's Prettiest Pets,' to bring in money for Botox during the lockdown." After realizing that "his love for making pets pretty was greater than his love for being pretty himself," he chose "to hang up his mirror and focus on his newfound passion: making ugly dogs pretty," the group wrote in a statement.

Back in December 2018, Lexxi sat out a STEEL PANTHER tour after being admitted to "sex rehab." The real reason for his absence was never officially disclosed.

During an appearance on a recent episode of the "2020'd" podcast, STEEL PANTHER guitarist Satchel stated about Lexxi's departure: "We didn't want him to quit. Nobody wanted him to quit, including a lot of fans. I'm sure a lot of fans are very sad that he left. But he's the guy who left the band. I think he's got his own things he's dealing with, and he just wanted to go and do that. So, I don't know… I can't answer for Lexxi Foxx. But we will all miss Lexxi Foxx, and we all wish him the best in everything that he does. But we didn't fire him; he quit the band. So we're gonna have to move on and get somebody else who's younger and foxier and doesn't need as much Botox," referencing the drug doctors have been using for years to treat wrinkles and facial creases.

Thirteen years ago, STEEL PANTHER changed its name from METAL SKOOL to its current moniker and shifted the focus of its act from '80s metal covers to originals.

Haley, who was an original member of STEEL PANTHER, recently announced the formation of his new band HOLLYWOOD GODS N' MONSTERS with longtime friend and television celebrity from MTV's "Pimp My Ride", Diggity Dave.